The Undertaker suddenly proceeded to not give a shit and threw themselves off hell in a cell into the announcer’s table when it appeared that things weren’t going their way.

It wouldn’t be unreasonable to call The Undertaker a centerpiece of hell in a cell, given that they’ve shown up so many times. Despite their gimmick making them appear cold, they were one of the best people in the business.
Each night, you can put a player in a hold, preventing them from taking actions for that night.

You’re here to bring back wrestling to what it should be, starting by ruining the faces and OMNIPLEX 2020.

Interesting Maneuver, but that move broke out light system.
So great, nobody can see now.

We’re calling PG&E to fix this minor error, but considering that they act as slow as molasses, we’re giving it a good 24 hours.

This feels anti-climactic.
I’m calling up my coannouncer to see if we can get their thoughts on the current game.

Well luckily for us the announcer table mics didn’t go out just the lights. And even better we have the tapes to go by. So lets watch that elimination of the Undertaker by the Undertaker. I think saying lazy was a bit of an understatement but more of a great bout. Undertaker fighting his moral demons right in the stage for us.

The two deadmen stared each other down. The babyface he always was staring down the heel route he never took. Feeling all the regret in his mind, the heel taker fought for his one time reign. He ran at the Baby Face persona of himself and gets an immediate chokeslam

He has it. Heel!Taker is gonna finally take over. He lifts him for the tombstone trying to finish it, but it was wobbly. The WWE fanbase started to scream boo as the phenom they loved for years was gonna add another loss to his streak. This empowered Face!Taker. As a last-ditch effort he tries leaning all of his weight to Heel!Takers back. Leaning Heel!Taker so far back.

He lands the tombstone ending and goes for the pin with the classic tongue out.

Face!Taker removed his evil self from the ring by throwing him into the announcer table. And walked out. Feeling he put on a great performance, leaving his hat and robes in the ring.

Then the lights turned off with a crack of lightning and hit of the gong. I think that was one of the best bouts in tonights arena and a great slobberknocker. Now we just wait for these damn lights to turn back on.

Have you tried turning it off and on again?

Oh lights are already off?

Do not speak until you are given permission by the host.

Thankfully for this event, the producers were able to figure out the cause for the lights going out
A cat just up and sat on the control panel (shitty laptop) for the lights, and that was why the thing wasn’t working.
For the future we are planning to install ‘Anti-Cat technology’ to prevent cats from interfering

It took the combined willpower of all of our technicians to pick the cat up off the control panel (shitty laptop) and put it down somewhere else
Just look at that face
You can’t just do that!

I got @DatBird to go to turn on the lights since because I found a way to trip over my own feet more than 3 times. My knees do want to kill me but that’s life, right?
So for the future I’m gluing myself to this chair.
And since… 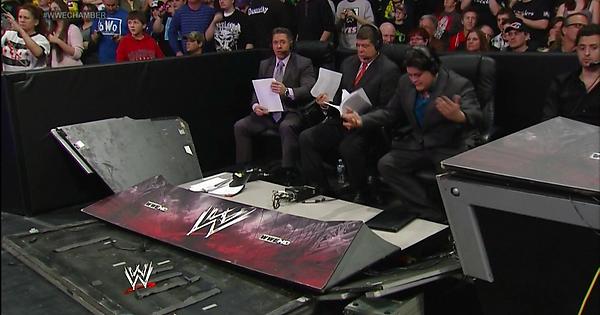 Wait
Who decided it was okay to RUIN THE ANNOUNCER’S TABLE AGAIN
Oh, and…yikes

Both CM Punk and Stone Cold Steve Austin got…

SLAMMED INTO THE ANNOUNCER’S TABLE HEAD FIRST. IT WAS TOO MUCH FOR US TOO SEE, THE ACTION TOO STRONG.

THE WRESTLERS AREN’T BACKING DOWN EVEN WHEN THE LIGHTS ARE OFF. THEY KEEP FIGHTING NO MATTER WHAT. THE MATCH IS STILL ON, AND THEY HAVE SHOWN IT.

While wrestlers galore showboat, shake the hands of fans, and act “virtuous”, you aren’t like that. You might be a champion, but you are Stone Cold.
Each night, you may choose a player to protect from night kills by tagging them out.

You’re here to take down all the heels who would dare tarnish OMNIPLEX 2020.

Founder of SES (Straight Edge Society) [in character of course], you found every conceivable way to be hated by the audience…and did it. Truly legendary stuff. Not legendary enough to have any special abilities, but still great.

You’re here to bring back wrestling to what it should be, starting by ruining the faces and OMNIPLEX 2020.

THERE ARE 7 WRESTLERS LEFT. WHO WILL WIN. WHO WILL FALL. FIND OUT NOW…ON OMNIPLEX 2020 ON CNBC

The lynch is between gorta and Mode today.

After some thinking and reskimming Mode’s posts D1 and his posts in scum game from year ago we discussed, I can say this:
If Mode is scum, his D1 play shows significant improvement over back then, by tone, and aggression.

There was also some post that’d be a little weird in Mode/Light/Ami team, I’ll pick it.

However it’s tough to forget about the nonsense reasoning from yesterday, so his D2 is much worse than D1.
gorta felt more natural yesterday and he was just kinda rolling with the situation instead of trying to widen the PoE.

Did gorta post yesterday? I still dont remember any posts from them

Yeah
@oB_L1ght You need serious work on wolf posting, your big posts were among wolfiest I’ve seen in my experience.